The Story Behind This Book

Years ago while reading a dictionary of theology I came across a statement which pointed out that, leaving out denominational variations, there are in fact only two developed systems of thought about the nature of man and the significance of his death—that we are left to choose between the two.

The writer went on to note that both systems leave us with issues to which we cannot find the answers; that the solutions appear to be of such a nature that they would require a third alternative – another developed system of thought about man, God and death, which at present we don’t appear to have. 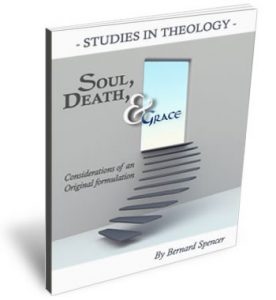 While I was preparing in the 1980s to write a thesis on divergent thinkers in the theological spectrum of human thinking writing during the 19th century, I discovered a large volume of material in which the treatment of the issues of God, man, and sin appeared to contain a perception of the nature of man and the significance of his death, that I felt may, when assembled, contain the pieces for formulating the desirable third alternative.

In the years since that first impression I have read and assembled and evaluated until I became as excited about death – what a thing to be excited about! one of my friends remarked – that I had to write this little book, which I believe the reader will find to be fascinating.

It presents a picture of a very gentle God doing a job nobody else wants, in such a way as to answer the questions about man’s nature and significance of his death; about the correlation between the life lived and the death died.

What exactly is God doing, and what is so exciting?!! You will have to read the book!

I hope you will be as blessed as you read as I have been while digging out this material and attempting to present the story of the soul, death, and grace.

Note: Many readers will want to start with chapter 3.