Inductive Study is that study which moves from the specific to the general or universal.

Deductive which moves from the general or universal to the specific.

In addition to the study steps outlined under Methodology # 1, Document 1, watch for issues that may throw light on the rest of your study, like, what does “it” refer to? i.e.., faith, grace, or saved?

The answers come from grammar and theology. Grammar cannot stand alone; it must have a context.  (See i.e. p. 2 of this document)

Incorporate the following type of concepts into your answer.

By meekness, by love, by a compassionate spirit, confess Christ to others. ARA September, 1898 By the use of parables He brought the eternal future to view.  ARA 6-15-1902

Let your testimony bear with it the incense of correct representation.  ARA 4-15-1912

“I am righteous, justify me for my righteousness” means that the Psalm is probably a messianic Psalm.

This conclusion comes from one’s understanding of the Bible story of the need for salvation by all of the Human race.

Inductive Bible study must be accompanied by general Bible knowledge.

9a.  Son speaks to Father

– a blessing that we could not have been without the experience which we really disliked? Is the revelation of such principles one of the reasons for the study of the Bible?

If you agree, is the faith and commitment of the 3 young men in chapter 3 that which was represented by the bands on the stump in the dream of the tree in chapter 4, or would the bands on the tree represent only the character of God – specifically love and righteousness, or justice and mercy?  Do God’s acts toward us rest only in His character or do they adjust to meet our life situation but within the character of God and His plan for our life?  If you answered that it falls within the character of God and His plan for our life, does it also fall within the need He has for us to help Him with a revelation of what He is like – that we are the visible act of God which is seen? In other words, does His plan for us represent that which is good for us only, or does it represent that which we would like to have it be if we could see from the end to the beginning, AND the place we fill in the outworking of the plan of salvation?  I am glad I get to ask the questions! Sometimes part of His self-revelation?  I love Bible study!

The answers to these types of questions come from the alignment of the material presented to the reader by the Bible material. Often the stories told must all be known to the one answering the questions before the correct answer can be found to the issues raised by the content of the story in the sequence.

Where was Daniel when the 3 worthies were cast into the fiery furnace in chapter 3? Answer: The people on the plain were there to prove their loyalty to the kingdom. Daniel was not there because his loyalty was not able to be questioned.  See Dan 2:46-49

Here is the patience of the saints: here are they that keep the commandments of God, and the faith of Jesus.

If I said, “I am here,” the asker would know where I was!  In the verse just cited, where is “here”?

In this methodology the answer to the questions come from the linguistics and the parallel text.

This class of questions and answers also introduces the issue of the “where” the material appears in the book that is the base for the questions.

What is the message which immediately precedes the phrase being studied?

Answer: In Habakkuk 2:1 the material can be properly translated as “I will keep my eyes open and present myself on (something hemming in) my best understanding and peer into the distance (leaning forward) to discern what He will say to bring to me insight and what I shall return (to retreat) on my correction or refutation.”

The Lord’s response was, “the just shall live by faith.”

In the middle voice, the phrase is better translated, “the just shall cause himself to live by faith.” 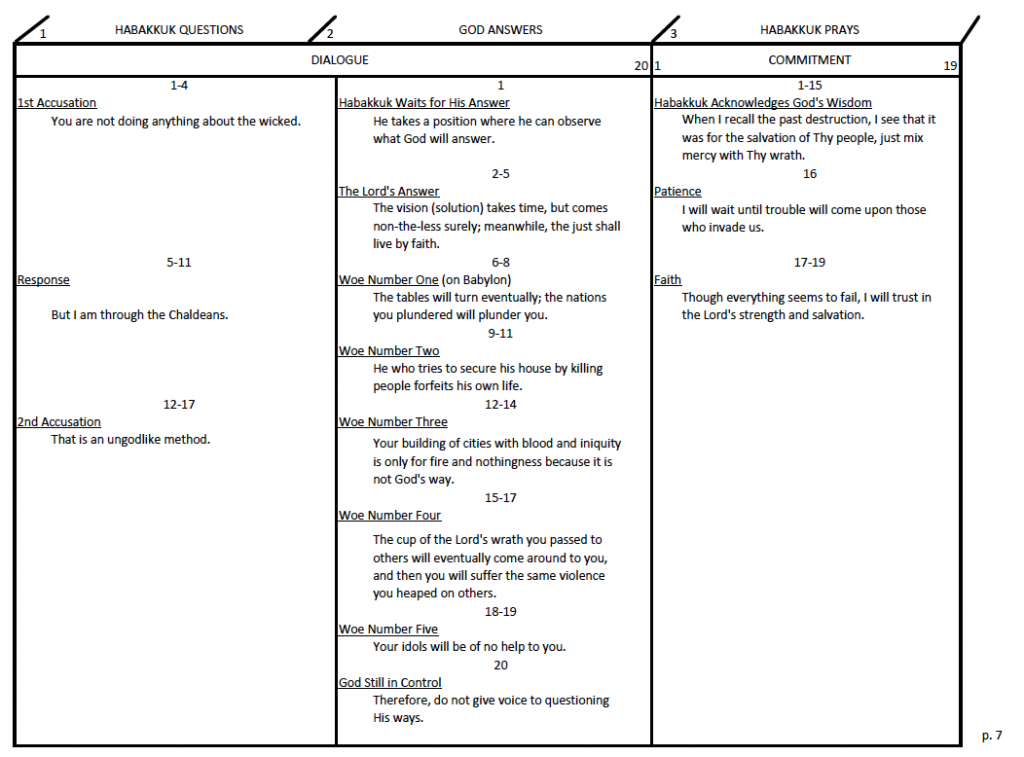 OVER-ALL STRUCTURE OF THE BOOK OF MATTHEW

Peter’s Confession: “Thou art the Christ”

“What is His authority?”

“All authority in Heaven & earth?

This section serves to set forth the object of the Revelation, it reveals the church as containing error and encountering difficulty, but being loved and cared for by the Lord.

This verse serves to mark the transition of focus from the churches in Asia to the church in succeeding ages.

Whereas John is to be shown times of great difficulty, God kindly shows him first a vision of His greatness as an assurance of His ability to see His church through to victory.

These verses show John the background issue of what is to follow. An inheritance has been forfeited.

This vision serves to show the solution to the problem set forth in vv. 1-

This song records the response of heavenly beings and creatures on earth to the solution announced in vv. 5-9.

This chapter shows God’s first act in attempting to rewin the alienated, though redeemed, inheritance.

The reaction of the inhabitants of the earth – woe to us, the Lord is coming and we aren’t ready – reveals the purpose of the judgments.

When men realized their need God compassionately commissions the angels to hold-up the judgment activity to allow men to attain to readiness, if they will.

These angels mark those who are ready to meet the Lord.

This vision serves to show what will be the final result of God’s condescension in having held back the winds of judgment.

God’s second act to get men ready for judgment.

The purpose of these judgments is to show the men without the seal of God their need of him.

This vision shows the result of the response of men in 9:20-21, and introduces the last phase of calling evil men to repentance.

Continued presentation of the issues requiring a judgment, and further revelations of the acts of the evil one as he reacts to the nearness of the judgment.

This vision servers to show proleptically the results of the conflict—between Good and evil—and the results of the judgment, to those who are faithful. These verses serve the same purpose as, i.e., 13:10, where the surety of judgment is set forth as a strength of the persecuted ones.

An announcement that the long with-held judgment time has arrived.

Vison of the beginning of the judgments on evil.

This vision serves to give assurance to God’s people that, (1) in the coming time of fearful judgments on evil they will be sustained by God; (2) they will ultimately stand in the physical presence of God forever; recognizing God as the source of their strength and victory and altogether just.

Warns men not to be included among the evil things, and assures them God will act on behalf of His faithful followers.

This vision serves to assure all that God in mercy makes every effort to win all people from following the beast and his agents as revealed in 14:8-17:18.

God sends another angel to aid the three of 15:6-12 in giving their message.

This angel aids in the warning of coming judgment and in appealing to men to separate themselves from the evil thing.

He is praised for His dealing with evil.

God stops all evil for an interval that it might be judged.

The earth without evil described.

The views regarding the structural arrangement of the Book of Revelation and the relation of such structure to the message are as numerous as the writers. It is sometimes said of an opponent in sports, “he is the kind of player who can make you look bad.” This seems to be very true of the Apocalypse. Before its divinely inspired message the finely developed theories of the best scholars ‘look bad’. I believe the basic reason for this is the failure of would-be expositors to start with John’s clear statements. John states “I saw”, “I heard”, and “He said to me”…, etc. Expositors have failed to start by accepting that aspect of John’s work as being worthy of serious consideration, choosing rather to assign their own evaluations as to the source and ‘inspiration’ under which John wrote.  Regarding the results of this type of treatment E. Lohmeyer wrote in 1934, “There are few primitive Christian writings which as a whole and in detail have received so much attention and yet seem to remain untouched in regard to the secret of their meaning and history”. This statement is still true today, even among many Seventh-day Adventists, who in face have a great advantage, when attempting to interpret the Revelation, in the Spirit of Prophecy. When Mrs. White wrote that the Revelation reveals the position, dangers, conflicts, and final deliverance of the church we know what the theme of the Book is; when she adds John wrote that the church might be instructed concerning the perils and conflicts before them, we know the purpose for which John wrote, and when we read that the judgment message of chapter 14 and its connected messages is followed by the coming of the Son of Man, we have a clue to the structure of one of the more nebulous portions of the Book. Finally, when Mrs. White writes that when the Revelation is properly understood there will be a reformation in the church, we know the result the study is intended to produce – a personal relationship with the One who is Lord of all and Who reveals Himself in the final conflict with evil and the “deceptions of the Devil”.